AVG Antivirus products have been the most preferred choice of most Windows users for some time now. This popularity is certainly not without its merits in a sense that there aren’t many antivirus software products out there that can rival AVG’s efficacy in getting the job done properly and is readily compatible with most OS platforms currently available. Other factors that have played their part in the widespread acclaim of AVG Antivirus are that it runs smoothly without lags or hampering system speed, also basic version of the software is free to download, so you get most reliable protection against spyware, Trojans and spams without spending a buck.

Users of XP are out of luck because developers have stopped providing support for XP and also AVG is not guaranteed to work smoothly with all versions of Windows 8/8.1. So, we recommend that in order to get the most optimum and efficient experience use AVG antivirus products from 2014 version onward on latest Windows 10. 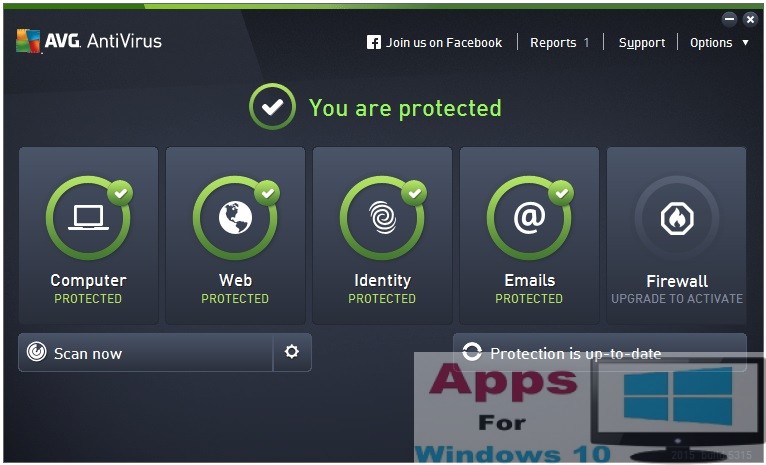 AVG 2015 Antivirus suit comes with three variants, AVG Antivirus Free, AVG Antivirus and AVG Internet Security. Each of these offers the basic protection against most common threats with some additional features available only on paid-for versions. One thing to bear in mind while installing any version of AVG antivirus is to check what amount of disk space would be required. There are multitude of language options available, you can pick the one you want as default language.

You can also choose between two installation modes Express install and Custom Install. Express install picks all the essential settings and installs them automatically without requiring you do anything. While in Custom install mode, you will be given the option whether to install AVG Add-ons, Email protection, Web shield, identity protection and language options or not. After finishing installation, register to receive constant updates and information about future AVG products.

Now let’s look on three iterations of AVG antivirus 2015 one by one to get a better view about what differentiates one type from another.

Apart from all the features of Free version, AVG Antivirus 2015 neutralizes the threat of viruses and spywares with its internet protection shield that defends your system against those dangerous files which can compromise your private data by getting themselves furtively installed. You can also prevent any unauthorized access to your private files with AVG encrypted password feature.

This free version of AVG Antivirus 2015 provides basic functions such as protection against conventional viruses, spams and spywares. With the help of file shredding feature you can permanently delete data and files, once deleted they cannot be retrieved, so pick carefully before deciding what to delete. AVG free 2015 has LinkScanner feature that will detect pernicious links and websites which could leave your identity protection vulnerable to hacking.

AVG Internet Security is the most complete offering of AVG aimed specifically towards enterprise customers. It includes all the features from file shredding to spam/virus detection, from LinkScanner to Data Safe and that’s not it, with Anti-Spam module all sorts of spams and scams are blocked before getting the chance to enter the system. It acts like a firewall that guards the whole system against hackers and viruses.