Android mobile OS is the most used mobile platform around the world, even iOS lags behind it in terms of user count and number of applications available for download. Best thing about Android that makes it the preferred choice of people over iOS is its open-end platform features allowing users more customization and control over their devices via Android apps compared to close-ended & much more restricted app offerings of the Apple mobile software. You can do whole lot more with Android apps by tweaking them according to personal requirements; configuring mobile devices’ appearance and settings is more fun and easier with Android apps. Smartphones and tablet screens are becoming much sharp and better but their display size is still no match to sharper PC Windows & Mac computers screens. Running Android apps on computers with all original features intact is what many long for, and that’s where Android emulator software packages come into play by facilitating seamless running of Android apps on computers. In this post we will look at best Android app emulators currently available for users to run Android applications on Windows 10, Windows 8, Windows 8.1 & Mac OS X and enjoy the full Android experience on desktops and laptops.

Let’s start off with YouWave Android emulator consisting of all the main ingredients that simplify the process of smoothly running Android apps on PCs. This emulator package comes with customer support facility intended to assist you in understanding and mastering all nitty gritty details of the emulator software. Even non-expert users can easily grasp the understanding of functioning features of this emulator in just a few attempts; interface is clean, although it may lack more advanced features of other Android emulators in this list but it gets the main job of playing Android apps on PC done in an efficient manner. One downside that might repel some is that YouWave doesn’t come free, after free-trial period you will have to pay for continuing to use this emulator package. [Download YouWave]

BlueStacks Android emulator is perhaps the most popular of all Android app players in the market. Recently it has been updated for the first time bringing whole host of new changing to the interface and functionality with an aim to bring more fun features to users than even before, BlueStacks 2 is packed with all latest Android apps emulating tools that one wish to have in any Android app player package. Best thing about BlueStacks is that it lets you play Android apps on full PC and Mac screens, you can maximize and minimize Android apps without any distortion of original graphics quality. Play both Android games and productivity apps on computers with easy to understand user-interface options. It offers virtual joy-stick for playing game, and also has in-build browser for searching apk files which you can use to directly install Android apps in this app player on both Windows and Mac OS X powered PCs. [Download BlueStacks]

Genymotion Android emulator is compatible with Windows 10/8/8.1 loaded desktops and laptops, Mac and older Windows version users will have to wait until developers decide to roll out this emulator’s version for them. Genymotion as Android emulator has a lot of potential and is being regarded as the most promising of all Android app players when it comes to offering best features in coming years. One aspects that differentiates Genymotion from other Android players is that it grants an option to copy paste stuff like card details for in-app purchases, passwords and email details or text messages from outside into the app emulator. Installing Apk files is as easy as drag and drop. [Download Genymotion] 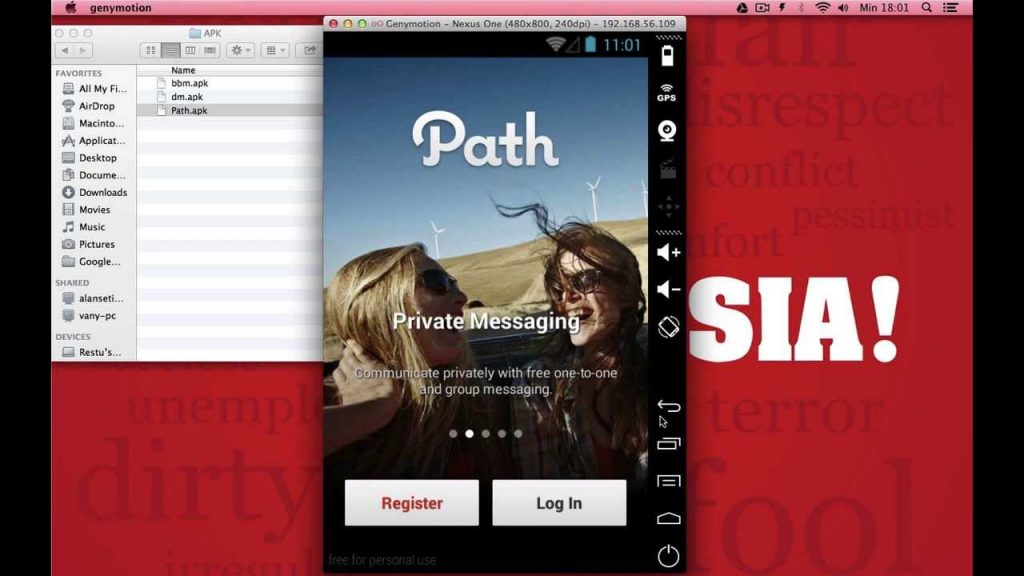 Andy Android emulator is mainly designed to play Android games. Apps other than games may not function smoothly or run at all via Andy because it has been developed keeping game addicts in mind. Android games are rapidly getting better graphic-wise but playing them on relatively smaller smartphone and tablet screens compared to larger PC displays doesn’t do justice to the game graphics and tampers gaming experience. That’s why developers behind Andy Android emulator wanted to bring something that would enable users to enjoy original Android gaming experience on bigger and better computer displays on full screens. You can integrate Android apps on PCs and use Android mobile as remote to play games via Andy Emulator. [Download Andy]

Android SDK is an emulator tool that allows Android apps and games developers to test their apps on computers. This testing program possesses all app testing tools including source codes support and debugger for step-by-step testing of every app development inquiry. For new Android developers there is a tutorial support in Android SDK, citing which they can find answers related to emulator’s functionality as well as app development help. Although it’s main purpose is to accommodate Android developers in designed futuristic 3D Android apps, but it can also be used to play existing official Google Play apps and games. [Download Android SDK]

Above list of best Android emulator software packages has been assembled primarily to assist you in choosing the best emulator tool for you to play Android apps now on computers running on Windows & Mac OS X operating systems.

How to Play DVDs on Windows 10 for Free