Finally much awaited Android firmware update for Bluestacks emulator tool has been released officially. Latest update brings Android Nougat to the beloved Android mobile app/game player tool for Windows PC and MAC. In this guide, you’ll learn how to download, install and properly setup Bluestacks N (Bluestacks Nougat) Android app player on your computer. Until now, Bluestacks for PC has been running on Android Marshmallow firmware. But this has changed as you will be able to install Bluestacks N having all the awesome Nougat firmware features and goodies. 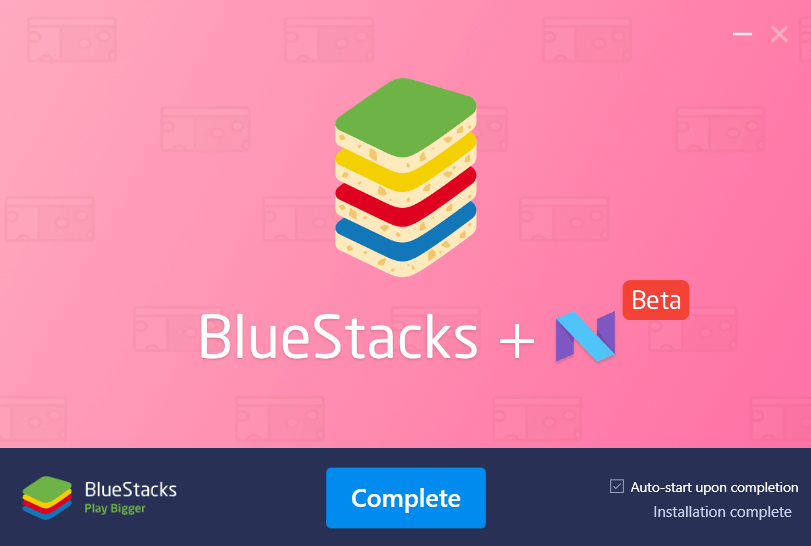 Bluestacks Inc. has updated BlueStacks Android Emulator with Android Nougat. Android mobile firmware is already in Android Oreo phase, which left many wondering why the popular Android emulator for PC is way behind its mobile counterpart in terms of the main firmware. Finally, the Nougat update for Bluestacks is here, and it is the only Android mobile app player for desktop and laptop that has received any such firmware update so far. This move is sure to enhance its popularity even further because on top of a stable emulator tool users will be able to enjoy latest Android Nougat features in BlueStacks to run Android apps on Windows and Mac OS devices better than ever. 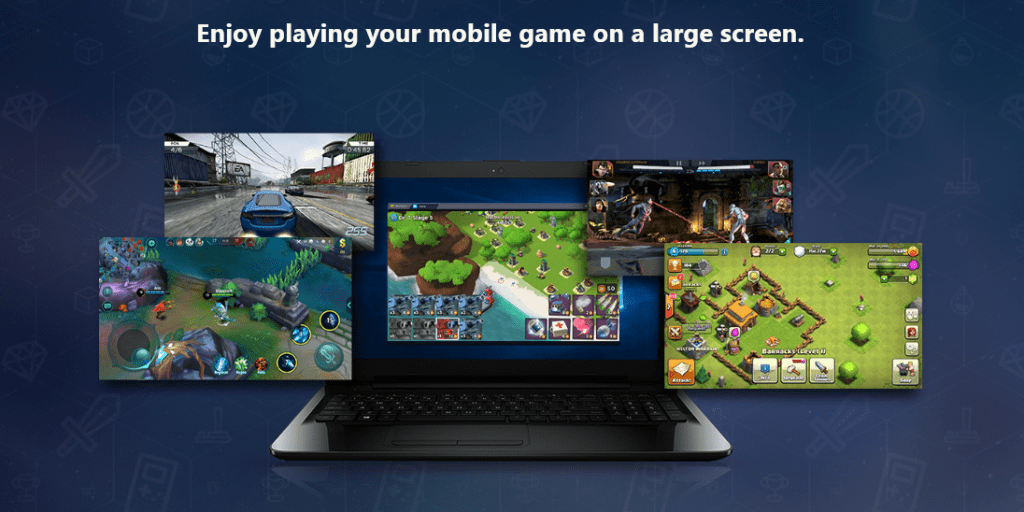 Bluestacks 3 is the most recent version. This is the biggest update since the release of the first ever Bluestacks a few years ago. Latest iteration features a completely overhauled interface, better system compatibility to run smoothly even on older PCs, faster performance, low consumption of memory and system resources while running heavy apps and games, and constantly updated Android apps library. Bugs and issues reported in the previous version have been fixed in this update. Multitasking allows running multiple apps and games side-by-side at the same time. The new Android Nougat firmware is going to run on the Bluestacks 3 interface. So this is going to further improve Android apps experience on PC and MAC.

Furthermore, Bluestacks + N (Bluestacks + Nougat) also comes with its own exclusive set of features never seen before on previous versions of the tool. When you launch Bluestacks + N for the first time after installation, you’ll be asked about selecting your avatar for use in the Pika World. This Pika World is basically the same BlueStacks Friends feature which was first introduced in Bluestacks 3 but with a new name. In this Pika World, you will see the avatars of all active Bluestacks users near your location. You can set wallpaper and background images to personalize your experience (for premium account holders only). That being said, the background of the “My Apps” section has an all new Android Nougat theme. In the “App Center” section, there are four categories: Top Charts, Collections, Preregistration (this is where you can register for upcoming Android apps and games, and earn rewards upon their release), and Space Voyage (a mini game to play with other players in the Pika World). 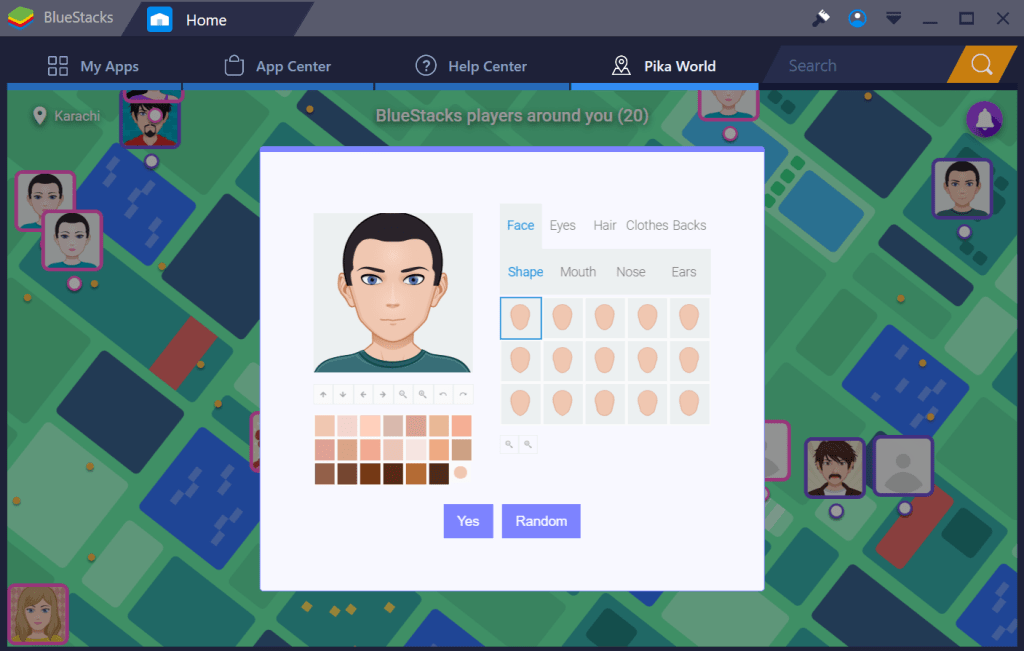 Top menu shows live status of your current collection of Pike Points. You can use these points to unlock new skins for Bluestacks emulator. Skins section is right next to the Pika Points menu and just beside you will see a personal profile icon to access your account details. There is also a drop-down menu next to your profile icon from where you can find settings of the emulator tool. In the settings, you can set the amount of RAM usage allowed on your computer while running the app player. Check for latest updates along with the rest of basic settings.

Now in the My Apps > System Apps tab, there is a Media Manager app, which is dedicated for saving your audio, video, images, and other media files. You can also find Settings, Google Play Store, Camera, Google Play Games, and Browser apps in this section. 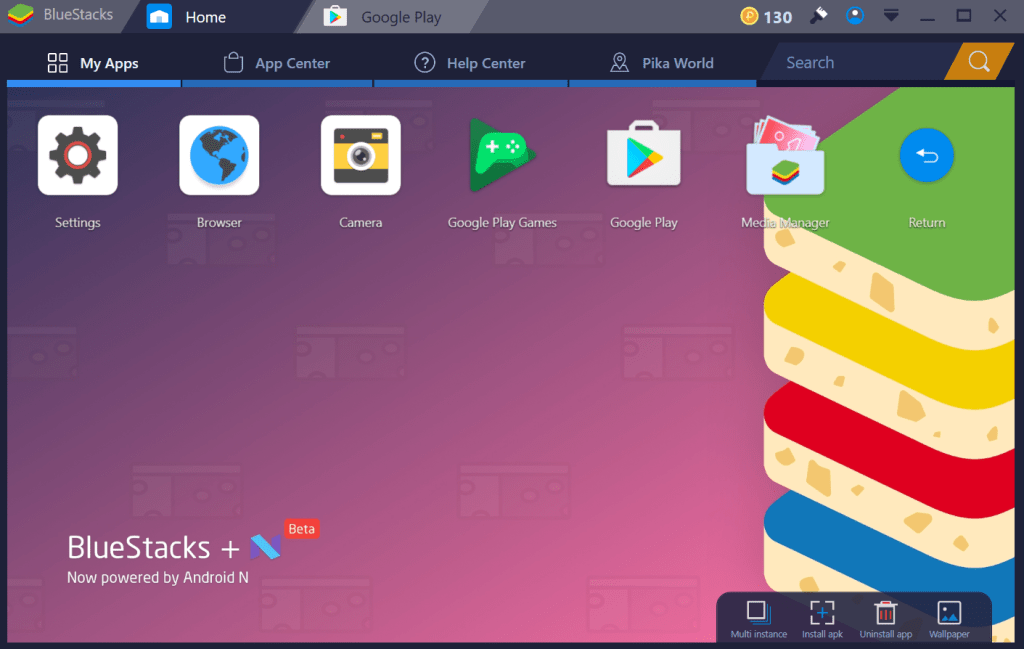 BlueStacks is popular because of its amazingly smooth performance while consuming minimum of system resources. Android apps runs flawlessly on Bluestacks Nougat. App launch time is almost negligible. Even the most demanding games run without getting stuck.

Bluestacks + Android Nougat is currently in beta phase. You can download Bluestacks N for free. However, it requires high-end system hardware for optimum performance. So if your PC or MAC doesn’t meet the minimum system requirements for BlueStacks N beta, it will not install.

How To Install BlueStacks With Android N On PC

1 – First of all, Download Bluestacks N from the official source here.

3 – Once installed, launch Bluestacks Android N on your computer.

4 – Setup your Pika avatar at start up. 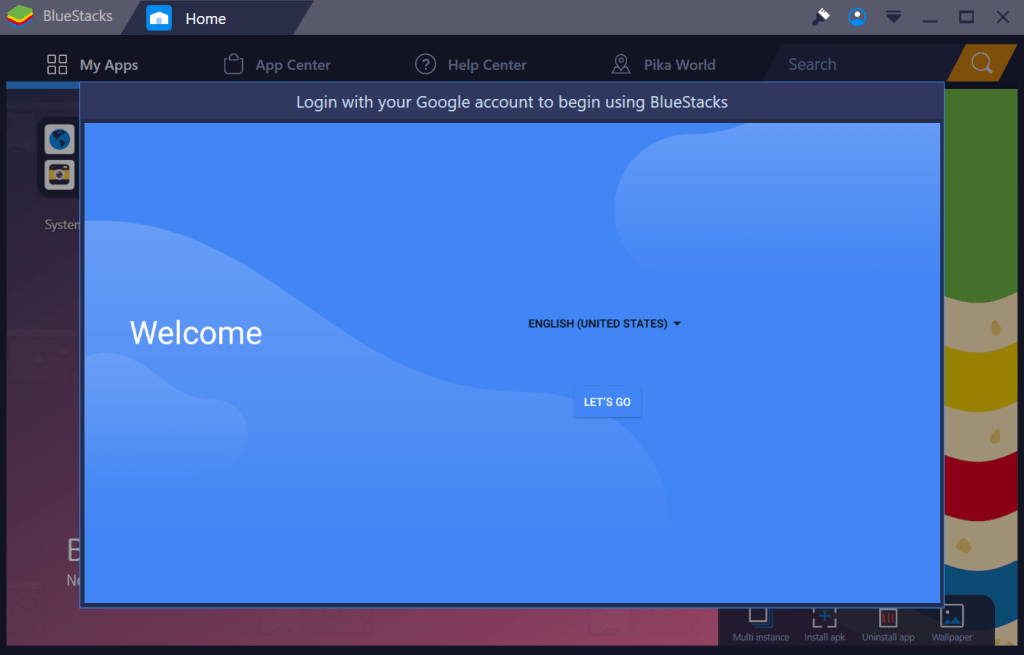 8 – Next, go to My Apps > System apps > Google Play Store and install your favorite Android apps and games.

9 – Bluestacks with Android N allows you to install Android apps through APK files. For that, go to the “My Apps” tab, and then click Install APK button located on the bottom-right corner of the emulator tool.

10 – All done. Once the app is installed, simply click on its icon to launch it.

Enjoy Android Nougat on Bluestacks while running Android apps/games on your Windows PC and Laptop.

How to Fix Nvidia Driver on Windows 10