We all love the thrill and unpredictability of penalty shootout in football and this game Final Kick has taken that tense aspect of any football match to a whole new level with its superior graphics and realistic game-play. Play as real football superstar like Rooney, Ronaldo, Messi and others to take penalties and beat rival goalkeeper with your accuracy and skills. Play in full capacity stadium with crowd chanting and camera angles giving real football match vibes. Download Final Kick on Android and iOS devices but those who want to enjoy penalty shootout on bigger Windows PC & Mac computer displays can follow instructions in this post to install the mobile version of the game on Windows 10/8/8.1/7/XP & Mac OS X loaded computers since there is no PC version of this game. You will need BlueStacks emulator for playing Final Kick for PC on computers. 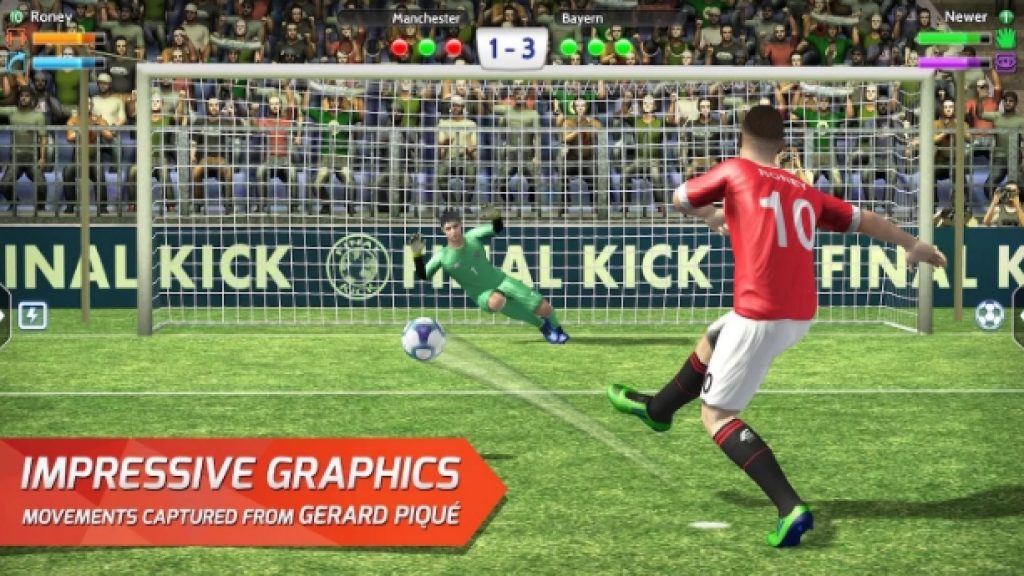 Play as goalkeeper or penalty taker in Final Kick for PC & Mac it your choice. Boost skills, stamina, and accuracy of your player by unlocking power-ups with money won from duels against other players online.

Slow-mo replays are breathtaking and give you a chance to analyse your performance and improving it next time by curtailing errors. On touchscreen displays use finger to move the ball or goalkeeper in desired direction, or use mouse or external controller when playing Final Kick for PC Windows & Mac on BlueStacks, as as shown below.

Games will be decided in the matter of minutes. Win penalty shootouts against other players. If you don’t have internet connection then you can choose to play from 20 local offline tournaments against 100 best football nations in the world.

Create your own team of superstars, train them to improve their skills, and buy new uniform for them with reward money. Every week new free tournaments are added in the game with special prizes up for grabs.

How to download and install Final Kick for PC Windows & Mac:

3 – Open BlueStacks and type Final Kick in the search box on home screen.

5 – Next hit the install button to install the game on BlueStacks.

6 – If you can’t find the game on BlueStacks then download Final Kick Apk here.

7 – Double-click the downloaded apk file from the location where you saved it on PC to install the game on BlueStacks.

If BlueStacks isn’t working on your PC then download Remix OS 2.0 here to play this Android game on PC/laptops.