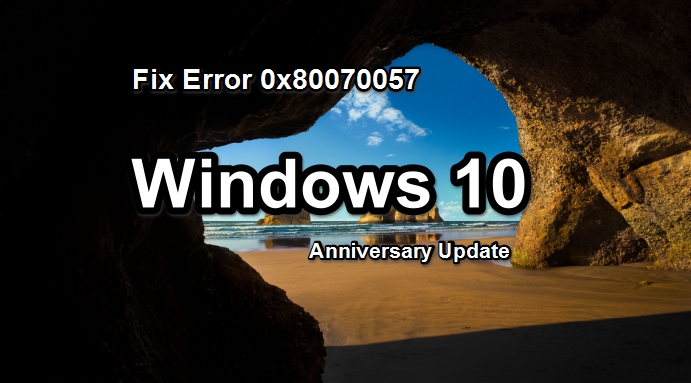 In the past when things were more manageable, such update errors were a rare occurrence, unfortunately, this is not the case anymore, especially when many upgraded to Windows 10 or still using it on older PC hardware. Windows 10 anniversary update is the biggest OS update rolled out by Microsoft to date, and as with any such large-scale software update, some errors are expected to arise. After identifying errors with anniversary update, we worked to find a solution to this irritating ‘Something Went Wrong’ Anniversary update error which you can see below to fix 0x80070057 error.

Many regular readers of our blog pointed out that they have been getting 0x80070057 error while trying to install Windows 10 anniversary update. Microsoft doesn’t provide reasons behind such errors and mostly it is left to users to find the solution and troubleshoot the problem. This new error is occurring after you download Anniversary update files using Windows 10 update assistant tool and get ready to install them on PC. When this error occurs on a PC, your computer screen gets frozen at 0% loading for a long time before showing error code 0x80070057 ‘Some Went Wrong’ message.

How to Fix ‘Something Went Wrong’ 0x80070057 Error Code during Windows 10 Anniversary update:

Although this error is quite frustrating; it wastes your time by freezing Windows screen for a long time during update installation but there is an easy fix to rectify the problem. Here’s how to fix 0x80070057 error code: 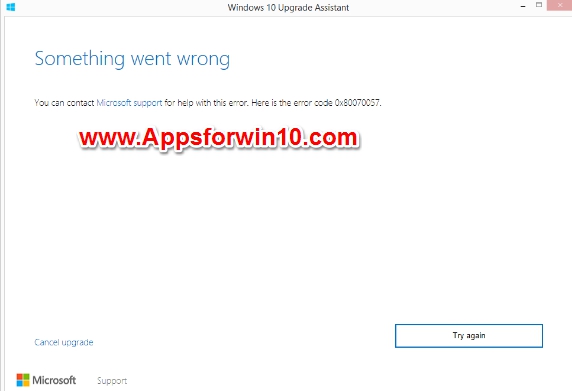 Disable Internet access, LAN/WAN or any other network connection to the PC during Anniversary update file verification by the Windows 10 installer.

Disconnect all internet access to the computer during installer verification of the anniversary update files after which you won’t see this error message 0x80070057 on the screen and the update process will continue as normal.

That’s all. You have successfully fixed Windows 10 anniversary update error 0x080070057 and won’t see it again during the update process. Stay tuned for more Windows 10 Anniversary update fixes. Any queries? Please do share your thoughts in the comments section below, if the problem still persists we will do our best to find the fix for you.

Also Check Out on AppsforWin10: Movie Box for Windows 10/8/8.1/7 (Download for Windows PC/Laptop/Tablet without Error)