Here’s a guide on how you can sideload apps on Windows 10 to play apps from a trusted source which is not available on Windows Store. Windows 10 allows you to sideload Windows 10 apps that are not on the official Store and below we are going to share some simple tips to show you how to get it done.

Sideloading an app means installing those apps that haven’t received official app certification approval from Microsoft, or are under the process of certification review before approval so they could be made available officially via Windows Store.

Windows is by default set to block any attempt to sideload apps. Reason being, sideloaded apps haven’t been tested or approved by Microsoft since they could cause harm to normal system function and result in bugs and errors. That’s why apps from approved places is recommended to protect your PC.

But on the other side, sideloading apps has its benefits as well. If you wish to test an app developed by your acquaintance who wants you to test it on your Windows machine to provide feedback. Or you have come across an interesting app on the internet that you wish to try but its not officially available on Windows Store yet. In such cases, sideloading apps on Windows comes in handy.

Here’s a quick guide on how to sideload apps on your Windows 10 device.

Steps To Sideload Apps on Windows 10:

4 – Now, under the ‘Use developer features’, select the Sideload apps option. 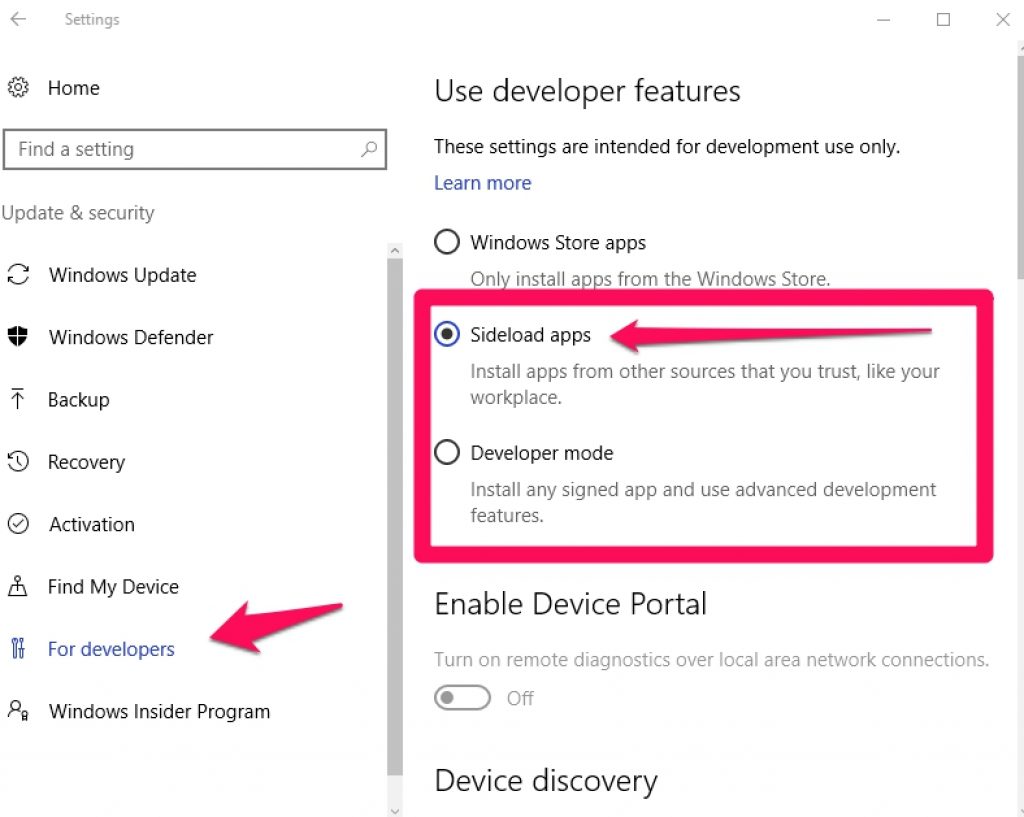 5 – Click YES when prompted to confirm that you understand the risks involved in sideloading app from outside the Windows Store.

As you see in the image above that just under the sideload apps option, there’s is another ‘Developer Mode’ option which is essentially the same option as ‘Sideload app’ only that it allows you to add tweaks and features in the app as well as sideloading it on Windows 10.

Please note that sideloading apps on Windows 10 carry significant risks that could potentially harm your PC. So, download apps only from developers and sources that you trust and have a reliable past record of creating flawless apps.

Also Check Out on AppsforWindows10:

How to Uninstall & Reinstall Built-in Apps on Windows 10

How to uninstall apps and programs in Windows 10

How To Fix AMD Graphics Card Error in Windows 10

How To Disable Ads in Windows 10