Windows 10 OS was launch by Microsoft last year amid much fan fare. And if upgrade rate and reviews serve as any potent indicator then it would not be an exaggeration to say that Windows 10 has been a hit and a desperately needed one following the disaster that was Windows 8. Microsoft want as many users upgrading to Windows 10 as possible and in this pursuit it’s not holding back from testing new ways to achieve the target. In an endeavor to convince users to aboard and upgrade to Windows 10 platform, Microsoft now let’s users test and try Windows 10 online for free before taking any decision regarding Windows 10 upgrade. If you have been unsure about upgrading to Windows 10 on PC/tablets or mobiles then try prominent aspect of the operating system with Microsoft Online Windows 10 Emulator.

There is no longer any need to first purchase and install the software before getting the taste of it because now Microsoft has launched a new Windows 10 demonstration website that provides video demo of Windows 10 features to lure new or undecided users to the platform. This online emulator shows what users can accomplish with Windows 10 and what sets the new OS from Microsoft apart from competition to enable users to make an informed decision about the upgrade, and also become familiar with the workings of the new operating system. 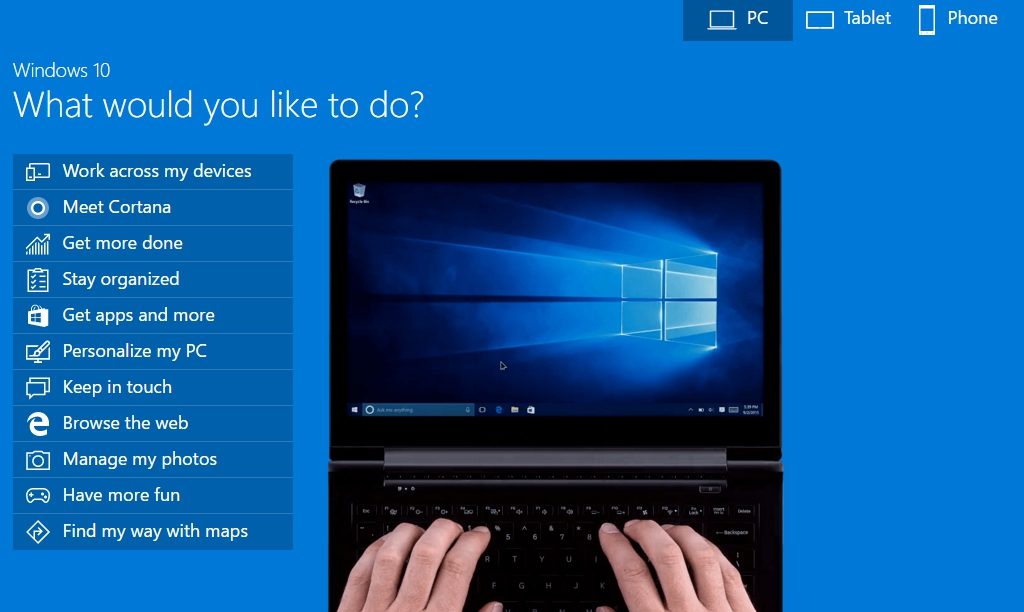 OS landscape has undergone a drastic shift in the past decade or so; Microsoft’s dominance over operating system market was such that it didn’t bother spending much on marketing as it was sure that people will eagerly embrace the company’s new OS due to lack of compelling alternatives. But things have changed, Mac OS X has mounted an efficacious challenge to Microsoft’s hegemony on OS market as is evident by ever increasing number of Mac sales figures in recent times, also smartphone and tablets have reduced users’ overwhelming reliance on Windows OS for carrying out daily tasks. This marked change in user behavior has prompted Redmond giant to look for supplementary avenues for marketing latest Windows 10 OS and this new online Windows 10 emulator demo is part of the same strategy to bring more users to the platform and to convince vacillating ones that this is the right choice for them when it comes to PC/tablet or phone OS.

When you visit Microsoft’s Windows 10 emulator website you will be greeted by option screen asking you to select device type PC, tablet or phone to see the relevant Windows 10 version for demonstration. Then Windows 10 online emulator interface changes display according to the device type.

On left hand side of the screen is the list of options like ‘browse the web’, ‘Meet Cortana’, ‘get apps and more’ and other main Windows 10 features. When you click on any item it will take you to another screen which displays a demo video showing the working of the that feature which you just selected in Windows 10 and on that particular device. Some features of Windows 10 have slight variations depending on the device type such as PC, tablet or phone.

By letting users see for themselves how advanced features of Windows 10 work rather than relying on reviews or word of mouth before jumping on to the platform acts both as a guide and Microsoft’s marketing tool. New users can learn what this new OS has to offer and existing users can learn with better clarity about the functioning of various features in Windows 10. Click on the link below to open Windows 10 emulator.

How To Enable / Disable Fast User Switching In Windows 10.

How to Delete Windows.old Folder in Windows 10